Fall is here and that means that it’s soup season! One of my very favorite soups to make is sausage, potato, and kale soup.

You may recognize this soup as Zuppa Toscana from the Olive Garden. But you are in for a treat because the homemade version is so much better!

This soup is loaded with sausage, potatoes, and fresh kale. One thing that I like about this recipe is that it makes a lot! The soup reheats well and we eat it for lunches during the week. It requires only 10 ingredients and is ready in less than an hour.

This post will take you through how to make this delicious sausage potato and kale soup step-by-step. Let’s get started!

Onion – This adds flavor to the soup. Use a yellow or white onion so it does not change the color of the broth.

Potatoes – My favorite potatoes to use in this soup are red potatoes or yukon gold potatoes because they have an amazing flavor. Since they have thin skin, I usually do not peel them.

If you don’t have yukon gold or red potatoes, russets work great too! You may want to peel them though because they have a slightly thicker skin.

Kale – I LOVE kale in this soup! Unlike spinach or other greens, kale keeps its integrity, even when the soup is reheated for leftovers the next day. This recipe calls for a lot of kale (two bunches!) and it will look like it will be too much. However, you will be surprised by how much it cooks down.

Milk – Adding some milk gives the soup some richness. You can use whatever milkfat you prefer.

Evaporated Milk – Evaporated milk is sold in a can and is quite simply milk that has had some water removed. Do NOT get sweetened condensed milk because it is not the same thing!

Evaporated milk is heated during the canning process which gives it is a slightly darker color than fresh milk. It also has a richer flavor, which I really like in this soup!

You can also use half-and-half or cream instead of the evaporated milk if you prefer, but wait to add it until the end. After the kale is done cooking remove the soup from the heat, stir in the cream, and serve.

Oregano and Red Pepper Flakes – These add flavor to the soup. Adjust the amounts to taste.

How to Make Sausage, Potato, and Kale Soup

Start by washing the kale thoroughly, making sure to wash any dirt out of the curly leaves. Holding the kale stem in one hand, gently tear the leaves away. Cut or rip the leaves into bite sized pieces and place them in a large bowl. Throw away the stems (they are too tough to eat) and set the leaves aside.

Also wash and chop the onion and potatoes so everything is ready to go.

Step 2: Cook the Sausage and Onion

Add in the cubed potatoes and two cups of water. Bring to a boil, cover, and simmer for 20 minutes, or until the potatoes are tender.

Step 4: Add in the Milk and Kale

Stir in the milk, evaporated milk, oregano, and red pepper flakes and bring to a gentle boil.

Add in the kale and cook for 10 minutes, or until the kale is tender. At first the kale will be quite fluffy and not all fit! Cover the pot to help trap the steam. Every few minutes uncover the pot and and gently push the kale down into the broth using the back of a spoon. This will help it to soften more quickly.

After the kale is tender taste the soup and add salt and pepper to taste. The soup is now done!

Ladle the hot soup into bowls and sprinkle with shredded parmesan cheese if desired. For the Olive Garden experience, serve with some soft breadsticks. Yum!

Hope you get to try this delicious sausage, potato, and kale soup soon. Happy Cooking! 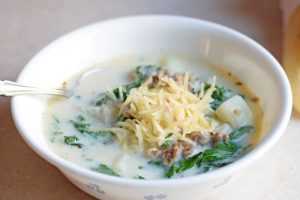 Don’t forget to pin for later! Hello!  My name is Mandy and I live with my husband, two kids, and german shepherd dog in a small town in Oregon. I am passionate about baking, gardening, and meal planning:)  I hope you enjoy discovering new recipes and learning tips to make your home garden more successful. Thanks for stopping by!